The FAT CAT Floral Tubes are exactly what I needed for the Common Milkweed leaves. The leaves stayed fresh and gave the Monarchs ample time to eat it all.

K
K.
Tube size is so much better than the small floral tubes

I really like the size of these floral tubes. You don't need to refill them as often. I do have one issue with them that I didn't like. I raise a lot of Monarchs, and I get multiple cats on a cutting. When I need to remove the entire cutting but still have a cat on part of a stem, the cap fits so tight that I really have to pull. I've knocked a couple of cats off doing this before I realized this would happen. I ended up cutting the leaves off that had cats on them and replaced the stems. I use the racks, but I also had a cat make a J in it. I waited several days to be sure his chrysalis was hardened, and I carefully removed it. Unfortunately, this chrysalis never eclosed. I ended up wrapping the racks in plastic wrap, but this makes it hard to get out the frass. I'll come up with something else next year to hold the tubes.

Hi Kathleen, thank you for your review and feedback, for the long peg racks we've used disposable shower caps to prevent this issue:

Also, you might want to also check out our next gen short peg racks that prevent this issue entirely...they will available again this holiday season 2020:

They worked out so well for my first time as a mother monarch!. It was so easy to keep replacing milkweed for the Hungary caterpillars!

Extremely useful in supplying our voracious caterpillars with milkweed!
I inserted the tubes through a piece of 1/4" plywood into which I'd drilled 1" diameter holes. They fit perfectly. 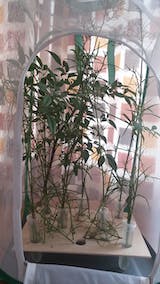 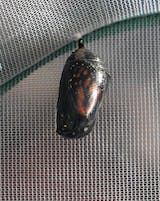 I have raised and released 5 healthy monarch butterflies so far with the help of these cages and the flower tubes/peg racks/poo poo platters. Hopefully many more to come! Such a rewarding, easy, and fun hobby to do. Thank you from Florida 🐛🦋🌱✨🌴🌊 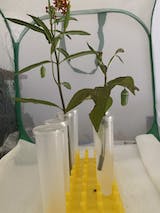 Anyone who loves Monarch butterflies and wants to raise and release them should get this book. It is easy to understand and very helpful. Any questions you may have...just look inside and you will probably find the answer. Tony's love for Monarchs and experience has helped me to successfully raise these magnificent creatures. Thank you Tony. 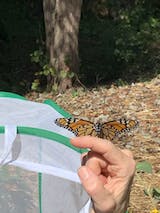 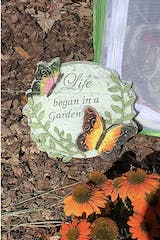 Came quick and was exactly what we needed. Had over 30 cat's show up in January - early this year. Was not sure with weather going into the 40's at night if they would survive. Cage big enough to put potted plants in. East to clean. We have released 10 butterflies so far and have 20+ cocoons. Loved being able to see them go from cats, to cocoons, to butterflies safely inside the house. Easy to carry outside to give them sun and fresh air during the day. Would recommend and buy again!!!

These were actually a gift for a neighbor who raises monarchs. I've let milkweed grow in my back yard and she harvests it for the caterpillars and eggs that she finds there as well as other places nearby. She loves them and is looking forward to the new season.

These were actually a gift for a neighbor who raises monarchs. I've let milkweed grow in my back yard and she harvests it for the caterpillars and eggs that she finds there as well as other places nearby. She loves them and is looking forward to the new season.